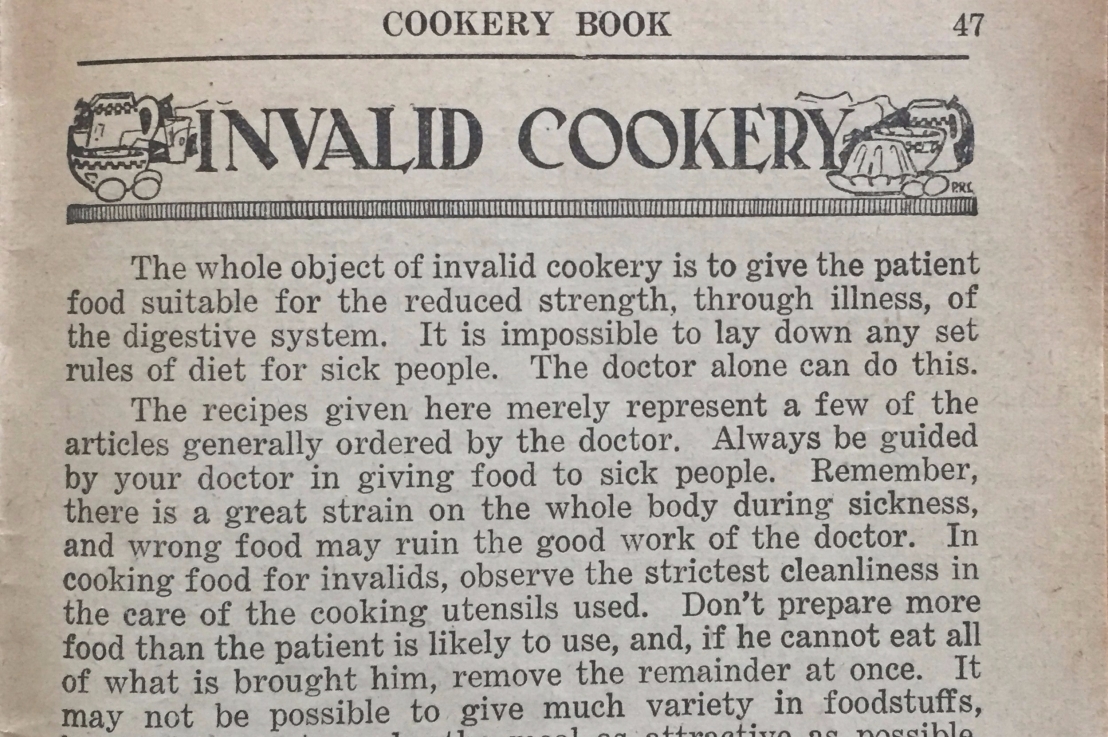 There were plenty of young invalids in the classic novels of my childhood. Poor, long-suffering Beth in Little Women! Plucky Judy in Seven Little Australians! At least the Secret Garden’s Colin enjoyed a better fate. My favourite, Katy Carr of What Katy Did, was confined to bed permanently after a fall – if only she’d listened when Aunt Izzy told her not to use the swing!

Based on these books, being an invalid seemed almost a romantic fate. You languished in your sick room while people brought you food on trays. I certainly never thought about what happened to those without servants or relatives to bring them trays. Not every Tiny Tim had a reformed Scrooge benefactor.

Recipes for the ill and recuperating were standard inclusions in cookery advice up until the middle of last century. Mrs Beeton, for example, has an entire section on invalid cookery. Many books were written on the subject by nurses. After all, it was only practical: from time to time, chances were your household had to cater for an extended convalescence, especially in times before the miracles of antibiotics, childhood vaccination programs, health insurance and aged care services.

A lot of the recipes feel like good common sense. Custards and jellies, teas and broths, all served up with instructions for presenting food ‘daintily’ to stimulate the depressed appetite. Some foods are bland and easy to swallow and digest, others nourishing and fortifying, drawing on long cultural traditions of food to comfort and heal the ill (like chicken soup, the ‘Jewish penicillin’).

But some recipes and practices sit less easily in my twenty-first century gullet. I guess we’re all products of our history and culture when it comes to food taste, smell and texture. The ones I find particularly hard to swallow follow some common themes:

I’m sure the priority must often have been simply to get some nutrients into a very sick patient. Soup and broth make perfect sense for that. So does gruel, a very thin porridge made with oats or barley. (I thought gruel was what they gave you in a Dickensian work house, but apparently not.) These would all have been served hot.

But rice water and toast water sound less appetising. You made them by soaking the main ingredient in cold water, then straining off the liquid to feed the patient. Essentially cold, starchy water. Similarly, there’s raw beef tea, where you shred and soak raw beef for a few hours. In that case, I would’ve thought there was a serious that risk the cure could have been much worse than whatever ailed you.

Even at the start of the 1900s, I don’t think many would have considered tripe, eel or oysters to be universally inoffensive flavours. And yet they all feature as dishes considered quite appealing and easy on the digestion for the ill.

I really don’t think any invalid would thank you for bringing those in on the tray, no matter how daintily presented.

I’m a bit thingy about food texture and even these words make me feel a little queasy. There are plenty of invalid recipes that involve raw-ish eggs, or concoctions that get the digestion process underway before it even hits your stomach, like curds and whey or junket. I suppose that was sometimes helpful so long as your ailment wasn’t nausea.

‘Coddling’ is the quintessential cookery for invalids, so much so that the term (which dates back to seventeenth century Anglo-French) also means treating someone like an invalid. To coddle an egg, you cook it very gently in water below boiling point, presumably often producing a barely cooked egg.

Other recipes call for adding a raw egg to milk or a tablespoon of alcohol to sustain the patient. Imagine knocking that back like a shot in your sickbed.

There was a lot of concern for the weak and delicate digestive system. And for these there was ‘peptonized’ food. Mrs Beeton supplies recipes for peptonized gruel, beef tea, milk and soup, which all involved adding a substance called ‘liquor pancreaticus’. The idea was that peptonizing started the digestive process so it was easier on the invalid’s system. Turns out liquor pancreaticus was an extract of pancreatic secretions. I don’t fancy Googling how it was obtained. But there were various brands around, including Bengers, which boasted its benefits as a ‘self-digestive’ food.

In some ways Mrs Beeton and her peers are nineteenth-century versions of current wellness bloggers, who like to talk about food as medicine. They were just drawing on earlier sensibilities about what benefited us. Perhaps Mrs Beeton would feel the same way about kombucha that I feel about some of her recipes.

Katy Carr’s ending was much happier than many of her fictional invalid peers. She eventually recovered and walked again, after a chapters-long stint in a darkened sickroom, and some hard life lessons about becoming a cheerful and deserving patient.